Bergzicht helps poor, unskilled, semi-skilled and unemployed persons in the Western Cape to improve their lives by equipping them with practical skills through Self-Empowering, Educare, Health and Frail Care, and Professional Cooking programmes. The City & Guilds’ Programme is presented by Bergzicht in conjunction with The Private Hotel School in Vlottenburg.

Williams, who started out as an assistant cook at Muratie, shared his story of how he had first enrolled for the iPOWER (Self-Empowering) Foundation Programme at Bergzicht with the students who are now embarking on a three-week internship at establishments like Spier, De Oude Werf, Asara, Kleine Zalze and Mulderbosch.

“I was attending the graduation ceremony of a friend who had just completed the Frail Care Programme at Bergzicht in 2014 and she introduced me to Ms Ingrid Andrews, the Placement Officer at Bergzicht’s Placement Bureau. I told her that I wanted to become a chef and she suggested that I enrol at Bergzicht,” shared Williams.

At this point, Williams had been unemployed for more than a year and a half, had lost faith in himself and his marriage was under a lot of strain.  As a father of two, he had tried many things to improve his family’s life, even working part-time with his father at a construction company, but none of these activities led to permanent employment.

A few weeks later, Williams enrolled and completed the Home Management and then the cooking programme. When he was sent to Muratie for his three-week practical internship, Williams was determined to impress the management there.

“I quickly learnt that you had to be a bit forward to get anywhere in life. So one day I went to Kim Melck, the owner of Muratie, and said to her, let me prepare the steak for the next dish. I had no idea how to cook a steak and did not even know what a medium steak looked like,” said Williams.

When the customer’s plate was returned to the kitchen with not a single piece of meat in sight, Williams knew he could do anything he set his mind to.

“You get one chance in life and you have to make use of that chance,” he told the students, nine of whom are sponsored by ABSA Barclays and four by the Distell Foundation.

Today Williams is the chef at Muratie and his signature lamb curry – his grandmother’s recipe but with Williams’ own twist – is a firm favourite amongst the restaurant’s customers.

“What Bergzicht has done for me, they have also done for you now. It’s not always easy in this industry – there are days that you butt heads in the kitchen, but you have to push through to make a success in this industry.”

“You are standing at the brink of a wonderful new stage in your life. You will be exposed to a world of work that is not always easy, but you will also be meeting new people and have new experiences that will shape you going forward. We are very proud to be associated with Bergzicht through our CSI initiative at the Distell Foundation and see this as our contribution to combating youth unemployment in this country,” said Morkel.

“Your next phase is practical exposure in a work environment to prepare you for placement, employment or entrepreneurial activities such as starting your own business. All this is possible. We know that every success story start with a dream. So dream big for yourself, see yourself in future new roles and positions. Do not give up too soon, but keep your dream alive,” he said. 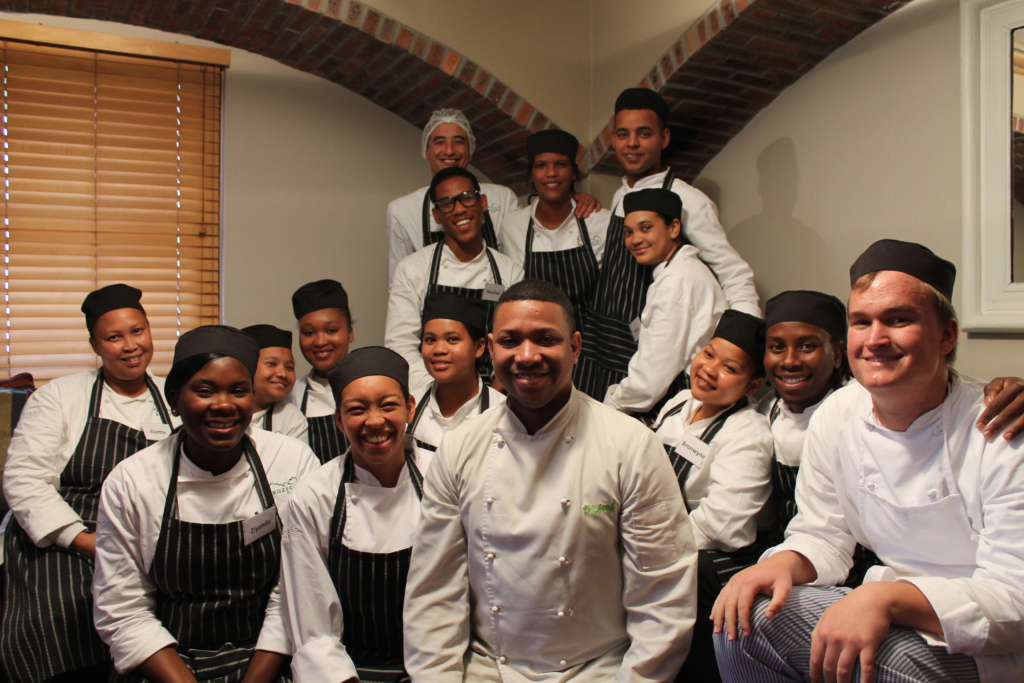 Marco Williams, Bergzicht Training alumnus and chef at Muratie was the guest speaker at a canapé brunch prepared by 14 students who completed seven weeks of the 10-week Bergzicht Training City & Guilds’ Professional Cooking Programme in June this year. Williams completed the programme in 2014. The students in the front from the left are Portia Tonsi, Mishka Prins, Marco Williams and Heinrich Lutz. In the middle row are Elzette Abrahams, Micaela Philander, Thelma Spandile, Elweeza Hendricks, Bronwyne Prins, and Axola April. In the back are Marchell Mentoor, Ashely Smith, Nicole Jeffries, Marco Wenn and Alisha Abrahams.