Thanks to a generous donation from the Hanns Seidel Foundation (HFS), Bergizcht Training – a non-governmental organisation situated in the Western Cape and focused on skills development – is now able to offer its beneficiaries access to an educational environment that is more conducive to optimal learning.

The HSF is a non-profit organisation based in Germany and focuses on promoting democracy, peace and development through its offices based in 57 countries across the world.

The donation received from HSF allowed Bergzicht to renovate its kitchen, which was in complete disrepair due to a lack of funding, and to purchase enough equipment, appliances, pots, pans and other utensils for each student participating in practical group sessions in their programmes.

“Now we are able to split our students into smaller groups during practical sessions and  everyone in that group can participate in the activity at the same time. This means that  we spend less time on repeating the same information during class in an effort to allow each  student a chance to practice what they are being taught,” said Bergzicht Training’s CEO,  Ms Renske Minnaar, at the public unveiling of their new kitchen.

“At the same time, we are able to improve our curriculum with regards to nutrition and kitchen skills too. For example, students participating in advanced programmes like the Health and Frail Care Programme are now taught how to properly prepare nutritional food for an elderly person and lay it out optimally on non-slip trays. It may seem like such a basic skill, but it makes a world of difference in the lives of the persons these graduates take care of and who are unable to do such basic things.”

The HSF also contributed towards Bergzicht’s Employability Skills course for 2016. The course is presented to graduates who have completed an advanced programme and helps prepare them for the world of work. It includes a computer training course.

“We regard Bergzicht as one of South Africa’s most successful training institutions for unskilled people from socially disadvantaged backgrounds. Bergzicht gives hope to those who fall through the grid due to a lack of education or opportunities,” says Prof Ursula Männle, Group Chairperson of the HSF, who flew in from HSF’s headquarters in Germany to attend the event.

“We strongly believe in supporting local ideas and initiatives in order to empower people and communities and Bergzicht seemed to be the right partner to do this and to make a sustainable impact at grass roots level. And we have not been disappointed for 24 years.”

Männle added that she was also impressed with how Bergzicht has empowered women to empower themselves.
SA Breweries also made a donation towards the purchase of small items for the kitchen.

Since 1992, Bergzicht Training has developed the skills of poor, unemployed, unskilled and semi-skilled individuals from the Western Cape by teaching these individuals market-related skills and helping them find employment. Their programmes include an iPOWER (Self-Empowering) Foundation Programme and advanced programmes in Edu Care, Health and Frail Care (accredited by the Health and Welfare SETA), and Professional Cooking. The City & Guilds’ Professional Cooking and Food and Beverage Service Programme is offered in conjunction with The Private Hotel School (PHS) in Vlottenburg, Stellenbosch, and is an accredited, world-renowned qualification within the hospitality industry.

The NGO has trained 10 000 beneficiaries since 1992, securing permanent employment for 76% of those students through its in-house Placement Bureau.

Delivering a message on behalf of the Executive Mayor of Stellenbosch, Ms Gesie van Deventer, Councillor Aldridge Frazenburg, responsible for community development, said: “Please know that your contributions make a massive difference in the lives of the students and the broader community. The spill over effect for skills and education is economic growth and employment for the Stellenbosch region. Your (HSF and Bergzicht) contribution will have major returns and contribute to the upliftment of our entire society.” 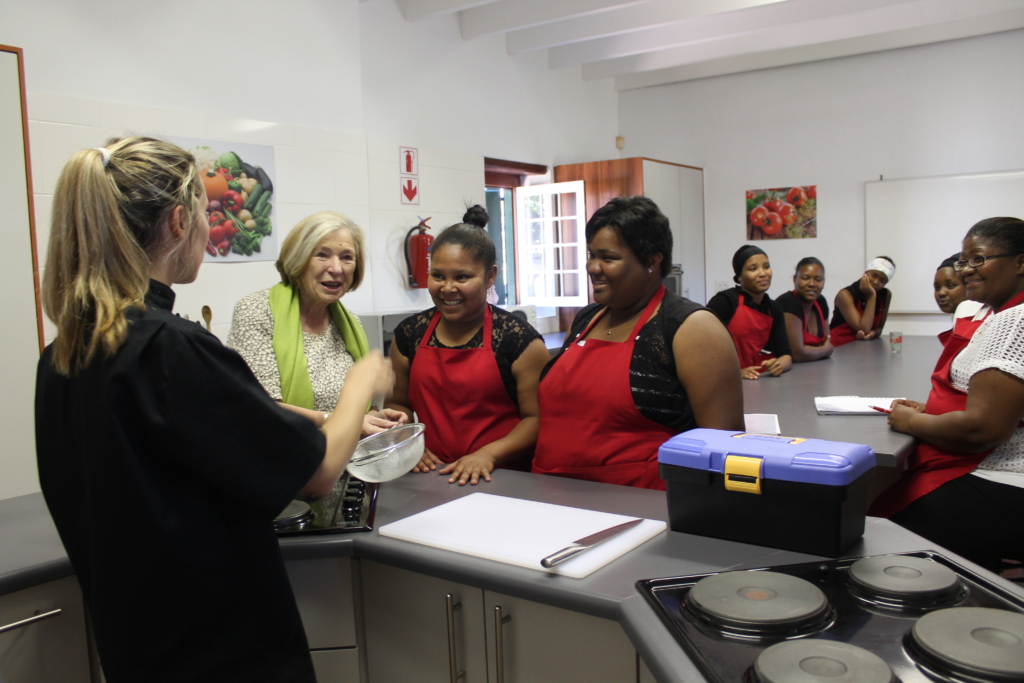